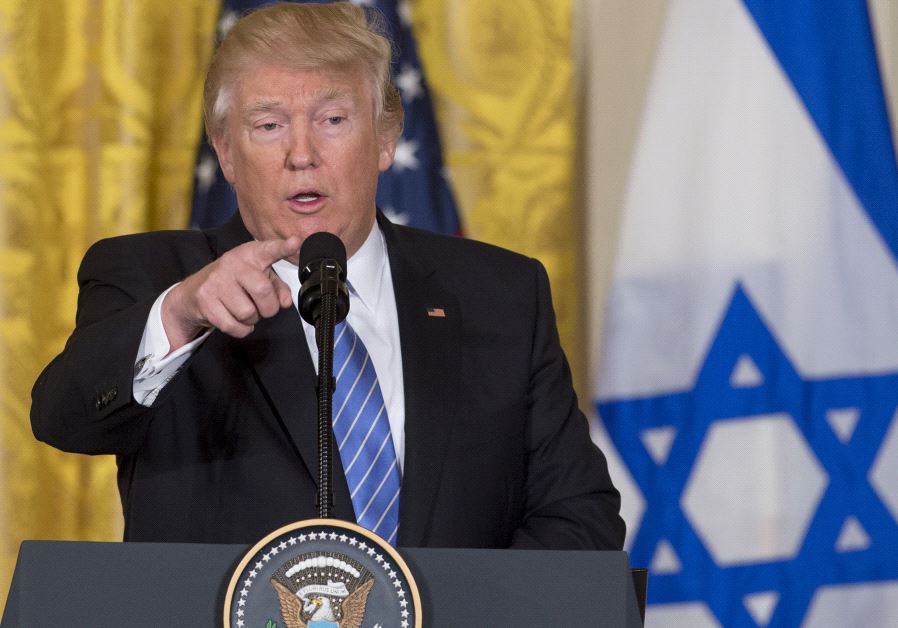 Donald Trump speaks during a joint press conference with Minister Benjamin Netanyahu in the East Room of the White House in Washington , DC on Feb. 15, 2017 with an Israeli flag in the background.
(photo credit: SAUL LOEB / AFP)

As you can imagine, more people are reading The Jerusalem Post than ever before.
Nevertheless, traditional business models are no longer sustainable and high-quality publications,
like ours, are being forced to look for new ways to keep going. Unlike many other news organizations,
we have not put up a paywall. We want to keep our journalism open
and accessible and be able to keep providing you with news
and analyses from the frontlines of Israel, the Middle East and the Jewish World.

As one of our loyal readers, we ask you to be our partner.

For $5 a month you will receive access to the following:

Help us grow and continue telling Israel’s story to the world.

UPGRADE YOUR JPOST EXPERIENCE FOR 5$ PER MONTH

WASHINGTON – In an extraordinarily tense exchange Tuesday with Democratic leaders, President Donald Trump threatened to shut down the government unless his proposed wall between the United States and Mexico is funded, and invoked an Israeli wall to defend his position.

“I am proud to shut down the government over border security,” Trump said in the White House Oval Office meeting with Rep. Nancy Pelosi, D-Calif., the speaker-designate, and Sen. Chuck Schumer, D-N.Y., the minority leader, according to a pool report. “If you really want to find out how effective a wall is, just ask Israel.”

It’s not clear which wall Trump is referring to; Israel credits a wall and fence running through the West bank with stopping terrorist attacks. Israeli Prime Minister Benjamin Netanyahu has cited another wall, along Israel’s southern border with Egypt, as a model for the United States in its bid to stop migrants from crossing without approval. The Israel-Egypt wall is a fraction of the size of Trump’s proposed wall with Mexico.

Democrats won the US House of Representatives in last month’s elections, and this was the first meeting since then between the Democratic leaders and the president. The acrimony and raised voices were unusual for such a meeting. Pelosi told Trump repeatedly that he did not have the votes in either chamber to get approval for funding of his proposed wall. She said she would call a government shutdown a “Trump shutdown.”

“Elections have consequences, Mr. President,” said Schumer, who is Jewish. “We shouldn’t shut down the government over a dispute, and you want to shut it down.”

Trump says a wall would keep criminals and terrorists among others from entering. Democrats and immigrants advocacy groups say Trump has massively overblown the risk posed by migrants.